Western storms have boosted snowpack and reduced drought. California is almost free of Extreme Drought (D3), according to this week's U.S. Drought Monitor. Out East, the Carolinas and Virginia improved too. However, drought conditions worsened in the Southern Plains, especially Texas. As of January 11, 2021, 46% of the U.S. and 55% of the lower 48 states are in drought. 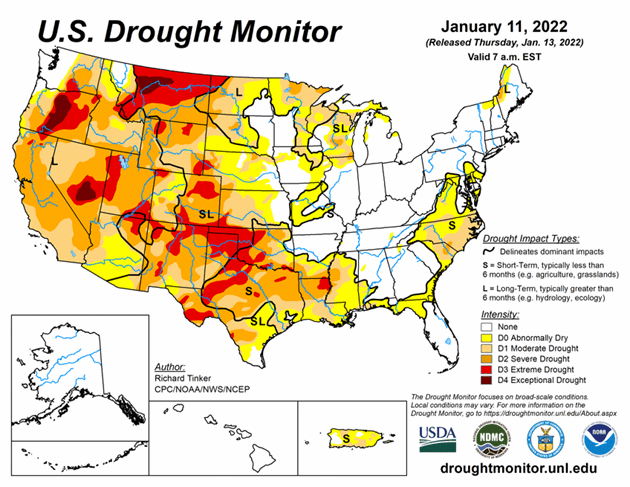 January 13-17, 2022 should bring more precipitation to parts of the East and Southeast. A broad area from Alabama and Georgia northward through the Carolinas, Virginia, and the Northeastern coastline should get over an inch, with scattered area of up to 2 inches in the southern Appalachians, near the Georgia/Alabama border, and in eastern North Carolina. Meanwhile, moderate precipitation of generally 0.5 to 1.0 inch is forecast across the interior Northeast and New England, and also in a swath from central North Dakota southeastward through Iowa and northern Missouri. Similar totals are expected in the coastal Northwest and the northern half of the Cascades, which will be considerably less than what the region has received for much of the winter. The rest of the 48-states will only see light precipitation at best. Most of the country west of the Appalachians should end up at least somewhat milder than normal for the period, especially from the Great Basin through the northern High Plains and Rockies, where temperatures are expected to average 8 to 16 degrees F above normal. Noticeably subnormal temperatures should be restricted to the Northeast, possibly reaching as far south as the Carolinas.

The Climate Prediction Center’s 6-10 day outlook (valid Jan 18-22, 2022) slightly favors above-normal precipitation across northern portions of the Rockies and Plains, across most of New England, and in the South from the Big Ben of Texas to the Atlantic Coast as far north as southern Virginia. In contrast, odds slightly favor below-normal precipitation in a swath from the central Ohio Valley westward into the south-central Plains. Better odds for drier than normal conditions cover much of the Four Corners States, the Great Basin, and much of the West Coast. Areas from the West Coast through the southern half of the Plains and the lower Mississippi Valley have enhanced chances for above-normal temperatures, but odds favor cooler than normal weather in the northern Plains, Great Lakes Region, Northeast, and Middle Atlantic States.