The Northeast saw more improvements as drought may have peaked there. However, drought worsened along with a huge expansion of abnormal dryness (D0) on the Plains (except Texas), Montana, and the Northwest. As of September 13, 2022, 37.91% of the U.S. and 45.18% of the lower 48 states are in drought. 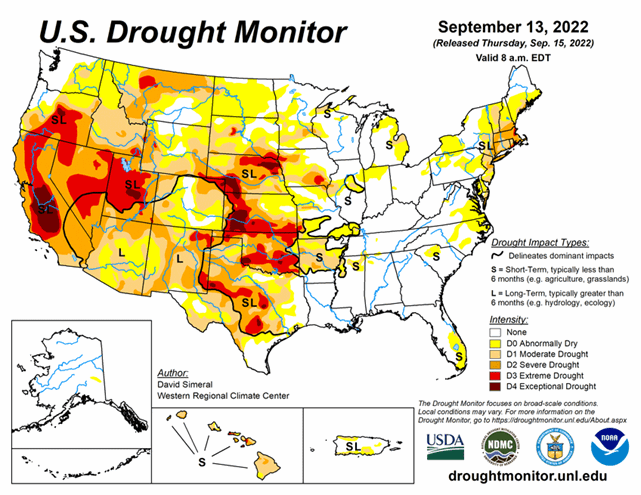 This U.S. Drought Monitor (USDM) week saw areas of isolated heavy rainfall in Southern California and the Desert Southwest in association with remnant moisture from Tropical Cyclone Kay late last week. Over the weekend and early this week, the residual moisture from the system moved further onshore impacting areas including Southern California, southern Sierra Nevada, Desert Southwest, and portions of the Great Basin. Overall, the heaviest accumulations were observed in very isolated higher-elevation areas of the Peninsular Ranges and Transverse Ranges of Southern California with accumulations ranging from 3 to 5-inches in addition to reports of wind gusts between 70-100 mph. Unfortunately, the overall impact of the precipitation on the long-term drought in California was negligible. In the High Plains, above-normal temperatures (2 to 6 deg F) and generally dry conditions during the past week continued to exacerbate drought conditions across areas of the central and northern Plains, with a growing number of drought impacts within the agricultural sector being reported to the National Drought Mitigation Center.

In Texas, areas of isolated heavy rainfall accumulations (3 to 5+ inches) this week continued to ease drought-related conditions in the Rio Grande Valley and South Texas. In the Midwest, widespread heavy rainfall accumulations ranging from 2 to 6+ inches impacted northern Illinois and southern Wisconsin over the weekend—erasing some of the short-term precipitation deficits. Elsewhere in the region, a combination of short and longer-term precipitation deficits in Iowa led to degradation on the map, with rainfall deficits during the past 90-day period ranging from 4 to 8+ inches in southern Iowa. In the Northeast and Mid-Atlantic states, widespread shower activity this week helped to improve drought-related conditions in the southern portion of the Northeast region as well as alleviate short-term (past 30-60 days) precipitation deficits in areas of the Coastal Plain and Piedmont of North Carolina. In the Southeast, most of the region remained drought-free with exception of coastal areas of east-central and southern Florida, where rainfall deficits for the past 90-day period ranged from 4 to 12+ inches, causing some concerns regarding hydrologic drought (some low groundwater and surface water levels) with the end of the wet season approaching. Looking back at the 2022 summer months, the contiguous U.S. experienced its 3rd warmest June-August period on record since 1895 in terms of average temperatures (+2.52 deg F anomaly). Average minimum temperatures nationwide for August (+3.20 deg F) and the July-August (+3.12 deg F) periods were the warmest on record, according to NOAA National Centers for Environmental Information (NCEI). Precipitation in the contiguous U.S. during August and the July-August 2022 period ranked at 19th and 28th wettest, respectively, placing it in the top 1/3rd wettest.

The NWS WPC 7-Day Quantitative Precipitation Forecast (QPF) calls for moderate-to-heavy precipitation accumulations ranging from 2 to 4+ inches across areas of the Upper Midwest, with the heaviest amounts expected in Upper Peninsula Michigan and northeastern Minnesota. Likewise, 2 to 4+ inch accumulations are expected across areas of Florida. Elsewhere, lesser accumulations ranging from 1 to 2+ inches are forecasted for northern portions of New England as well as areas out West including the Northern Rockies, Wasatch Range, eastern Great Basin, and portions of the Southern and Central Rockies.

The CPC 6-10-day Outlooks calls for a moderate-to-high probability of above-normal temperatures for all areas east of the Rockies, while much of the West is expected to be cooler than normal with exception of coastal areas of California. Precipitation is forecasted to be above normal across much of the West. Below-normal precipitation is expected across most of the Eastern Tier.