Record heat and dryness in the Central U.S. led to degradations in Nebraska, Kansas, Oklahoma, and others, including Exceptional Drought (D4). The Northern Rockies and Northern Plains also saw a large expansion of drought this week. 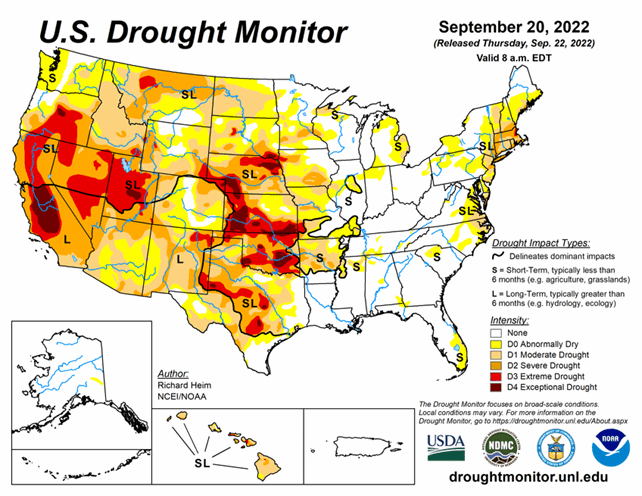 An upper-level ridge dominated the central contiguous U.S. (CONUS) during this U.S. Drought Monitor (USDM) week (September 14-20). It was bracketed by an upper-level trough which moved out of the Northeast early in the week, and a Pacific upper-level trough that moved into the West as the week progressed. Pacific weather systems moved across the northern states between the troughs. This pattern resulted in above-normal precipitation across much of the West and parts of the Northeast. Fronts associated with the Pacific systems triggered showers and thunderstorms across parts of the central and northern Plains to Mid and Upper Mississippi Valley. For the rest of the CONUS, a large dry air mass covered much of the southern Plains and East throughout the week. Rain occurred along a stationary front draped across Florida that was associated with the southern edge of the air mass, but for much of the South, Southeast, Mid-Atlantic, and Midwest regions it was a dry week. Temperatures averaged warmer than normal across the Plains to Great Lakes, and cooler than normal across much of the West, Southeast, and northern New England. A tropical system brought heavy rain to Puerto Rico and the Virgin Islands. Drought or abnormal dryness expanded or intensified across northern parts of the West, from the central and northern Plains to the Mid- and Upper Mississippi Valley, and over parts of the Mid-Atlantic coast. Drought or abnormal dryness contracted where it rained, especially in parts of Florida, New Mexico, and the Northeast, in a swath from Iowa to Illinois, and across Puerto Rico.

A strong upper-level low pressure system will move across the northern half of the CONUS during September 22-27 while high pressure generally dominates the southern half of the country. By the end of the period, the upper-level circulation pattern will consist of a ridge over the West and a trough over the East. This scenario will result in above-normal temperatures in the West and South with below-normal temperatures in the Northeast. Half an inch or more of precipitation, locally up to 2 inches, is forecast to fall from the Four Corners states to the northern Rockies and eastward to the central and northern Plains, as well as across parts of the Great Lakes, much of the Northeast, and over southern Florida. Half an inch or less is expected over Oregon, the Mid to Upper Mississippi Valley, the Tennessee Valley to Appalachian chain, and Mid-Atlantic Coast. Little to no precipitation is predicted for Washington, California, and Nevada in the West, across the southern Plains to Southeast, and over parts of the Midwest.

For September 28-October 5, the western ridge and eastern trough pattern is expected to persist. Odds favor warmer-than-normal temperatures across the West to Mississippi Valley and the Alaskan panhandle, with cooler-than-normal temperatures from the Northeast to southern Appalachians and over southwest Alaska. The circulation pattern will likely result in below-normal precipitation from the Pacific Northwest to Northeast, across the Great Plains to Mississippi Valley, and over the Ohio Valley as well as western Alaska. Odds favor above-normal precipitation over the coastal Southeast, the eastern half of Alaska, and a small area in the Four Corners states.