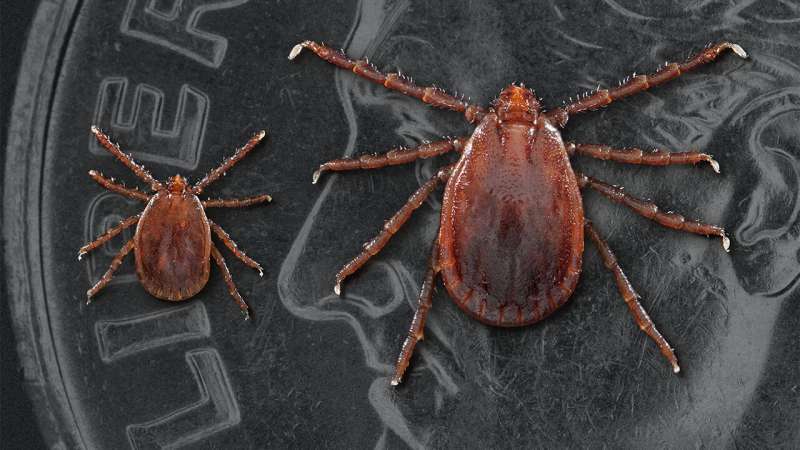 The Longhorned tick causes the loss of millions of dollars in agricultural revenue to cattle producers worldwide, and it is now in northern Missouri.

Originally found in eastern Russia and the Australasian region, this tick was first found in the United States in 2017 in New Jersey. It has since reached the Mid-Atlantic, New England and Midwestern regions of the U.S., and now has been discovered in northern Missouri for the first time by researchers at the University of Missouri.

Last year, the Longhorned tick was found in the southern part of the state. This latest discovery indicates an additional economic burden to cattle producers due to ticks; as the Longhorned tick infestation could lead to significant loss in weight gain for cattle, similar to an already widely prevalent disease called anaplasmosis; but so far, the threat from this species of tick to cattle—and people and their pets—in Missouri remains low. However, researchers emphasize that the discovery of the Longhorned tick in the state increases the need for more vigilance towards ticks in general.

While most ticks reproduce traditionally, female Longhorned ticks can lay thousands of eggs without the help of a male, which makes it easier for them to quickly establish in new areas. Infestation of the Longhorned tick can lead to possible transmission of bovine theileriosis, a disease that kills red blood cells in cattle.

While there have currently not been any confirmed cases of bovine theileriosis in Missouri cattle, this discovery further heightens the need for Missouri cattle ranchers to make informed decisions regarding quarantining protocols when introducing new cattle into their herds in an effort to protect the health of their livestock, which has significant economic implications.

"Studying the prevalence of invasive ticks in different geographical regions can help veterinarians and farmers take proactive, preventative steps that may ultimately protect the health of livestock, which has huge economic implications," said Rosalie Ierardi, an anatomic pathologist at the MU College of Veterinary Medicine who recently discovered two Longhorned ticks in Linn County, Missouri, while conducting anaplasmosis surveillance research.

Ierardi collaborated on the project with Ram Raghavan, a professor in the MU College of Veterinary Medicine and MU School of Health Professions. Raghavan, who has been tracking the spread of various species of ticks in the U.S. for 15 years, predicted the potential geographic distribution of the Longhorned tick back in 2019. So far, the tick appears to be establishing in the areas that he had predicted in that study. He said there not only appears to be an increase in the abundance of all ticks in the Midwest in the past decade, but also an increase in the pathogens and diseases they transmit to cattle, humans and pets.

"Warmer temperatures in the Midwest seem to be creating perfect conditions for ticks and the pathogens they carry to thrive, and this problem may get worse going forward as the planet continues to warm, which is concerning," Raghavan said. "We must be vigilant and devote resources toward trying to prevent these ticks from spreading diseases that harm the health of cattle, humans and their pets. The discovery of Longhorned ticks in northern Missouri greatly increases the need for more vigilance towards ticks in general and the need for routine monitoring of the pathogens they transmit."

Ierardi encourages cattle ranchers who notice weakness, jaundice and pregnancy loss in their cattle to contact their local veterinarian and the MU Veterinary Medical Diagnostic Laboratory for assistance with tracking down the causes for such signs.

"Symptoms of this disease can be often mistaken for anaplasmosis, so we encourage producers and practitioners to be vigilant and get their animals tested whenever there is a doubt," Ierardi said. "Although these Longhorned ticks are known to transmit a number of human disease pathogens, at the moment the threat from them appears to be mostly bovine theileriosis, which impacts cattle."