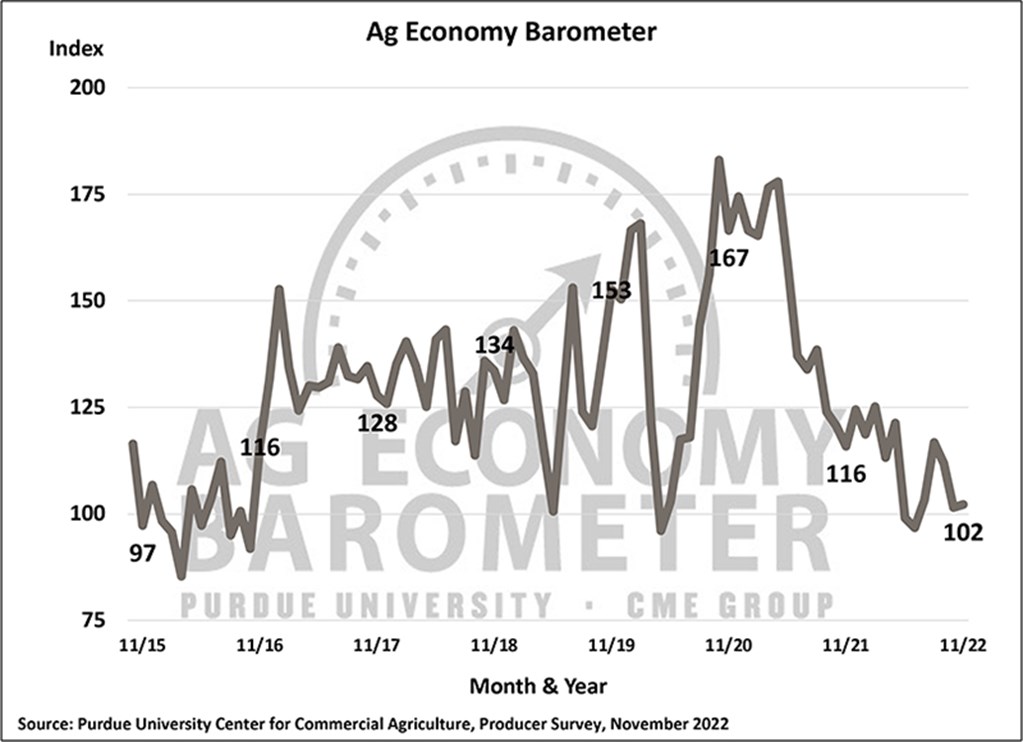 Unlike the two most recent presidential elections, the November mid-term election outcomes did little to swing farmer sentiment. The Purdue University/CME Group Ag Economy Barometer came in at a reading of 102 in November, unchanged from October. There was, however, slight movement in both of the barometer's sub-indices. The Current Conditions Index declined 3 points to a reading of 98 while the Future Expectations Index increased 2 points to a reading of 104. The Ag Economy Barometer is calculated each month from 400 U.S. agricultural producers' responses to a telephone survey. This month's survey was conducted after the U.S. mid-term elections from November 14-18.

"Even though sentiment remained relatively unchanged in November, producers are continuing to look at their bottom line," said James Mintert, the barometer's principal investigator and director of Purdue University's Center for Commercial Agriculture. "Rising interest rates combined with high input and energy costs are creating a lot of uncertainty at the farm level."

The Farm Financial Performance Index improved modestly this month to 91, up 5 points from October, but it remains 14% below this same time period last year. While nearly one-third of producers continue to express concern that their farms' financial performance this year will be worse than the prior year, just over two-thirds of producers expect their farms' 2022 financial performance to be equal to or exceed 2021's. Still, high input costs continue to weigh on producers' minds with 42% of respondents in this month's survey citing that as their top concern in the year ahead. Just over one-fifth (21%) of respondents chose rising interest rates, while 14% cited input availability and declining commodity prices as a top concern.

The Farm Capital Investment Index dropped back to its record low of 31 in November, erasing gains from the previous month. Nearly 80% of respondents indicated now is a "bad time" to make large investments in farm machinery and of those, 47% chose "rising prices of farm machinery and new construction" as the primary reason. By comparison, only 10% of respondents felt now is a "good time" to make large investments.

Given the sharp rise in energy prices that's taken place this year, this month's survey asked producers how they've responded to the cost increase. Just over a fourth (27%) of this month's respondents indicated they've made changes in their operation because of rising prices for energy. Of those who indicated they made changes, 33% indicated they reduced tillage, 24% reduced nitrogen rates and/or changed application timing, 11% increased their use of no-till, and 8% said they reduced crop drying.

Farmland auction results in the Corn Belt continue to set new record highs, yet producers show signs of becoming less bullish on farmland values. The Short-Term Farmland Value Expectation Index declined 4 points to a reading of 129 and the Long-Term Farmland Value Expectation Index remained unchanged at 144. Both indices are well below the highs established in fall 2021. When asked to look ahead one year, 12% of respondents this month said they expect values to decline compared to just 4% who felt that way a year ago. Among producers who expect farmland values to rise over the next 5 years, over half (52%) chose non-farm investor demand as the primary reason for their optimism.